The Situation of Global Clothing Garbage

Why cause large Global Clothing Garbage?

According to reports, ASOS, a well-known British fashion e-commerce company, launches at least 5,000 new styles every week. Due to low prices and convenient purchases, the rapidly expanding fast-fashion clothing production line has also made people’s consumerism more rampant. Consumers are buying more clothes, but at the same time, the rate of discarding clothes is also faster than before.

The report “The New Textile Economy” released by the Allen MacArthur Foundation in 2017 showed that global apparel production has doubled in the past 15 years. But the utilization rate of clothes-that is, the average number of times a piece of clothing is worn before it is discarded, has dropped by 36%. Among them, in the United States, which has many fast fashion brands, research shows that in the past 30 years, the number of Americans buying clothes has increased by 5 times, but each piece of clothing is only worn 7 times on average. 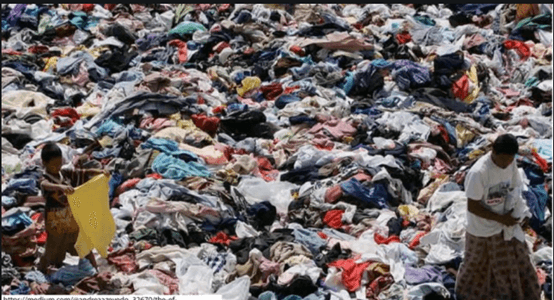 What is the effect of clothing Garbage?

The United States “exports” 700,000 tons of used clothing every year, and the Chilean desert becomes a “clothing cemetery”

In the United States, second-hand clothes that cannot be sold or entered into textile recycling are often exported to those “distant countries.” According to the statistics of the US Environmental Protection Agency (EPA), of the 16 million tons of textile waste generated in the United States each year, about 700,000 tons are exported overseas, and the “poisoned” mainly by the third world countries.

“Things that can’t be sold in thrift stores are sold to the ‘defective’ market. This is a long and complex supply chain that is completely invisible to ordinary people and even those involved in it,” OR Ricketts, the co-founder of the foundation pointed out. This invisible “recycling industry chain” has caused mountains of textile waste to flood the second-hand markets, beaches and landfills of third world countries.

According to foreign media reports on the 8th, each year at least 39,000 tons of excess fast fashion clothing is transported to the landfill in the Atacama Desert in Chile. The piles of discarded clothing gradually become a “spectacular” in this desert and Landscape. These synthetic or chemically-treated waste clothes release no less toxic substances than waste tires or plastic products, and release pollutants into the air or underground waterways. It may even take 200 years to complete biodegradation.

I’m Here To Assist You

Something isn’t Clear?
Feel free to contact me, and I will be more than happy to answer all of your questions.